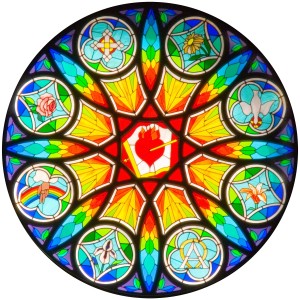 THE SYMBOLISM OF THE WINDOW

Traditional rose windows are divided geometrically into 8, 12, 24, or 36 parts.  The St. Joseph’s window is based on the number eight, which signifies rebirth and baptism.

The central focus of the window is the symbol of St. Augustine.  His special attribute is the flaming heart signifying his religious fervor and love of God.  Also included is the arrow, a symbol of his remorse, and a book, used to represent his teachings which have been so important in the history of Christianity

Traver Artisans, a stained glass studio run by Ted and Ann Traver formerly located in Andover, Massachusetts.  In their work, the Travers use the same techniques the artisans of the Middle Ages used when making stained glass windows in European cathedrals.  Ted and Ann made many diverse items, ranging from small butterflies to large church windows.

Their work can be found in various parts of the United States and abroad.  Two memorial windows are in the Chi Psi fraternity at the University of North Carolina at Chapel Hill.  Examples of their major domestic pieces can be seen in homes in Baltimore, Maryland, Hendersonville, North Carolina, Beacon Hill, Boston, Andover, and Ayer, Massachusetts, and London, England.  During the summer of 1981, while artisans in residence in Bordeaux, France, the Travers built the windows for the Château de Mirefluers and the Château d’Archins.